Q&A: Left out of the Bible 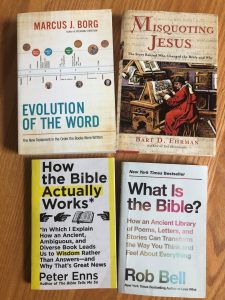 Grab these 4 books in our church library!

I love this question and the person who asked it should go to seminary! When was the Bible organized into Old Testament and New Testament? Was anything left out?

The earliest compilation of texts resembling the Christian Scriptures was the Muratorian Canon around 200 C.E. But it wasn’t until the 5th century that various Christian traditions came to a basic agreement on the Biblical canon. Lots of texts were left out. The Infancy Gospel of Thomas which details Jesus’ childhood was left out. So was the, similarly named by unrelated Gospel of Thomas, which is a collection of sayings of Jesus without a narrative.

A popular book at the time was one called The Shepherd of Hermas. It is a story about a rich freed slave who has several visions. In one of these visions, there is an angel disguised as a shepherd which is where the name comes from. It’s a big book of advice on Christian living. Some scholars think it was so widely available, that those putting together the bible just assumed it’d be known. Sort of like Mere Christianity by C.S. Lewis, I just assume everyone as read that book. You know what happens when we assume.

Another interesting book that was popular in the first century but left out was the Apocalypse of Peter. In this book, Peter talks with the Risen Christ and is granted a vision of heaven and hell. It’s the book that Dante based his Inferno and Paradise books on and where we get the layered visions of heaven and hell.

These were left out and a strange book that no one could make heads or tails of made it in. I guess they thought Revelation was so weird, that it had to be divine. It’s in. Others texts are out. If your bible has an Apocrypha, those are other books that were written around the time of the Gospels and were collected by not officially put in.

If you’re looking for more reading on this subject, check out the following books (many of which are in our church library!)

Evolution of the Word: The New Testament in the order the books were written by Marcus Borg

Misquoting Jesus: The story of who changed the Bible and why and The New Testament: A historical introduction to the early Christian writings, both by Bart Ehrman

What is the Bible: How an ancient library of poems, letters, and stories can transform the way you think and feel about everything by Rob Bell

How the Bible Actually Works: In which I explain how an ancient, ambiguous and diverse book leads us to wisdom rather than answers—and why that’s great news by Peter Enns.