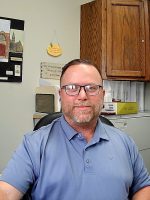 Jeff and his family are residents of Medina, moving from Columbus, Ohio, where he graduated from Franklin University with a Bachelor of Science in Financial Management. Jeff began his career in Finance at the State of Ohio Treasury Department, as a fiduciary overseeing all State of Ohio Employee Pension funds, roughly $128 billion. Jeff spent 10-years in the Financial segment, prior to taking on the role of Director of Marketing for Damon’s Grill and then Buffalo Wild Wings. Jeff was a key-leader in helping Buffalo Wild Wings grow from 240 locations, to 1,200 in just 7 years. Seeking less business travel after the birth of their 1st daughter, Jeff & Melissa decided to become entrepreneurs and renovated the former Whitey’s Army Navy store, transforming the space into a NY Style Pizzeria – Courthouse Pizzeria.

Away from his business and new role with UCC, he enjoys spending time with his family, boating, bass fishing and “training” their yellow lab (Ginger).