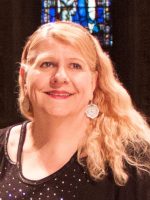 Jennifer received her BM and MM degrees from the Cleveland Institute of Music and Case Western Reserve University.  As soprano soloist, conductor and cantor at Trinity Cathedral, Cleveland she performed many classical, gospel and jazz works. She was most recently the Director of the Mostly Jazz Mass at the Cathedral. She has performed as a soloist in New York City, Cape Cod, Edinburgh, Scotland, and numerous churches in the Greater Cleveland area as a classical musician and with her jazz band Gateway. Jennifer recently retired from her post as Director of the Performing Arts at Trinity High School, where she taught for 11 years. She is the director of “MusiGals” an adult women’s choir on the east side. She was a finalist and prize winner in the Savanah “American Traditions” vocal competition in 2012. Her vocal quartet A Note of Class performed in the greater Cleveland area and was invited to perform at the White House. She performed on the soundtrack to a special arts video that premiered on National PBS. She currently directs the MusiGals a Cleveland area women’s choir and “gigs” with Gateway Band. Jennifer is excited to start her tenure at UCC Medina!!